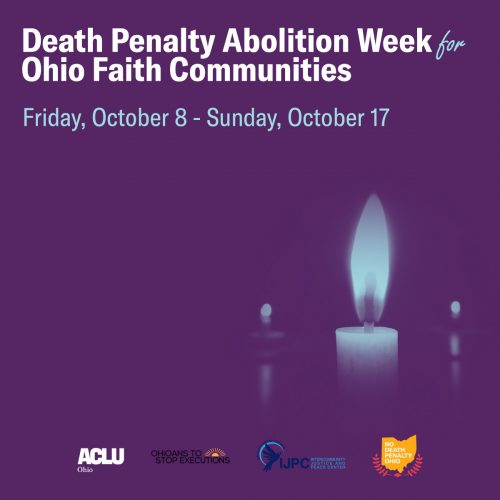 Join people of faith across Ohio to stand in solidarity for abolition of the death penalty. Recognizing the injustices in our criminal justice system, we are unwilling to participate in the cruel and inhumane practice of sentencing our fellow neighbors to death.

Check out these events below. Five are virtual and one is local in Cincinnati.

Abolish the Death Penalty- Official RAC Ohio Campaign Launch
Thursday, October 7
8:00 PM
Via Zoom – register here
Join Ohio’s Reform Jewish congregations as we kick-off our Death Penalty Abolition Campaign. Learn about what Judaism has to say about this issue, hear from those directly impacted and find out the next steps to take action to abolish the death penalty in the Buckeye State.

Sponsored by the Archdiocese of Cincinnati’s Offices of Catholic Social Action and Respect Life, Bellarmine Chapel, the Dorothy Day Center for Faith and Justice at Xavier University, and the Intercommunity Justice and Peace Center.

Justice Gone Wrong
Wednesday, October 13
6:00 PM
Via Zoom – Register here
Can you imagine being sentenced to death for a crime you didn’t commit? 186 people nationwide know what that feels like and the number continues to grow. Join us for a powerful conversation with Phillip Morris, the author of the National Geographic article, “Sentenced to Death but Innocent.”

Virtual Prayer Vigil
Wednesday, October 13
7:00 PM
Via Zoom – Register here
Vigil participants will join in prayer for life-affirming alternatives to capital punishment and learn about the ways that Catholic Ohioans can take action to support death penalty repeal efforts in the Buckeye State.

Sponsored by the Catholic Mobilizing Network.