“The Penalty” Screening at Xavier University 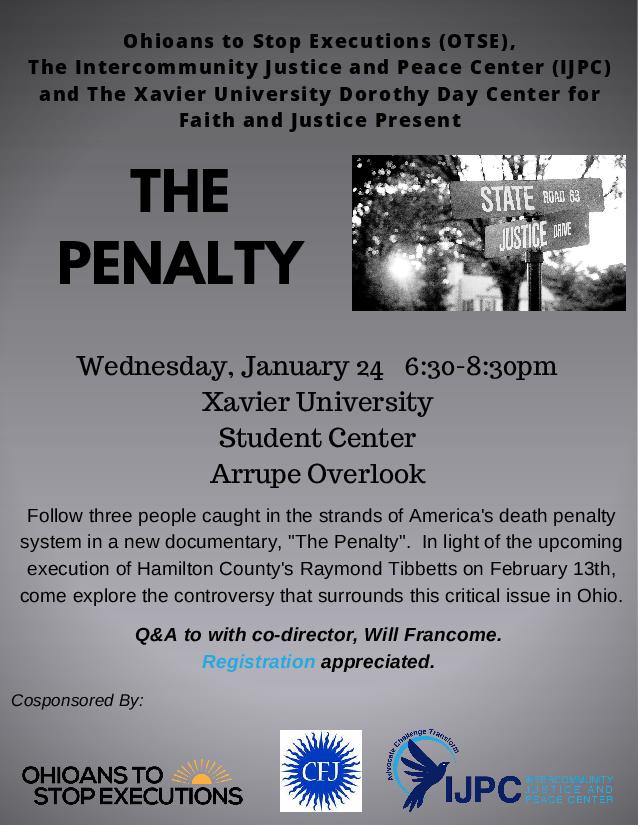 IJPC will be hosting The Penalty in partnership with the Ohioans To Stop Executions (OTSE).  The screening will be followed by a talkback session with director Will Francome & special guests. See the trailer here.

The Penalty (86mins)
Three extraordinary people embark on journeys of recovery, discovery and rebellion and find themselves center stage in the biggest capital punishment crisis in modern memory. Still in competitions and showing in Ohio for the first time, this compelling documentary film follows three individuals impacted by different aspects of the death penalty: A man recently exonerated and freed from death row as he puts his life back together, a murder victim’s family as they traverse the legal process, and an attorney as he unsuccessfully struggles to keep his client alive.

The screening comes at an important time for the death penalty in Ohio. More than 25 executions are scheduled from now until 2022, the next being Raymond Tibbetts on February 13.

This event is free to attend and open to the public. Reservations appreciated here.

PARKING ALERT
The basketball game starts at 6:30, but the Cintas Center parking lot closes to anyone without a specific game pass at 4:30. All other lots on and around campus are open, but will fill up quickly. We recommend coming early, maybe having an early dinner on or near campus. The best and closest lot to the Gallagher Student Center is the one behind it, which can be entered either from Dana Ave. to University Dr. or directly from Victory Dr. There is a lot across Victory near the soccer field, very limited parking on the circle near Bellarmine Chapel which is accessed from Cleneay Ave., behind Smith Business Bldg off Francis Xavier Way, and in various other lots. There will be people directing traffic and if stopped, folks should say they are attending an event at the GSC to be allowed to pass.
Here are links to campus maps:
https://www.xavier.edu/about/documents/campusmap.pdf
https://www.xavier.edu/about/map.cfm