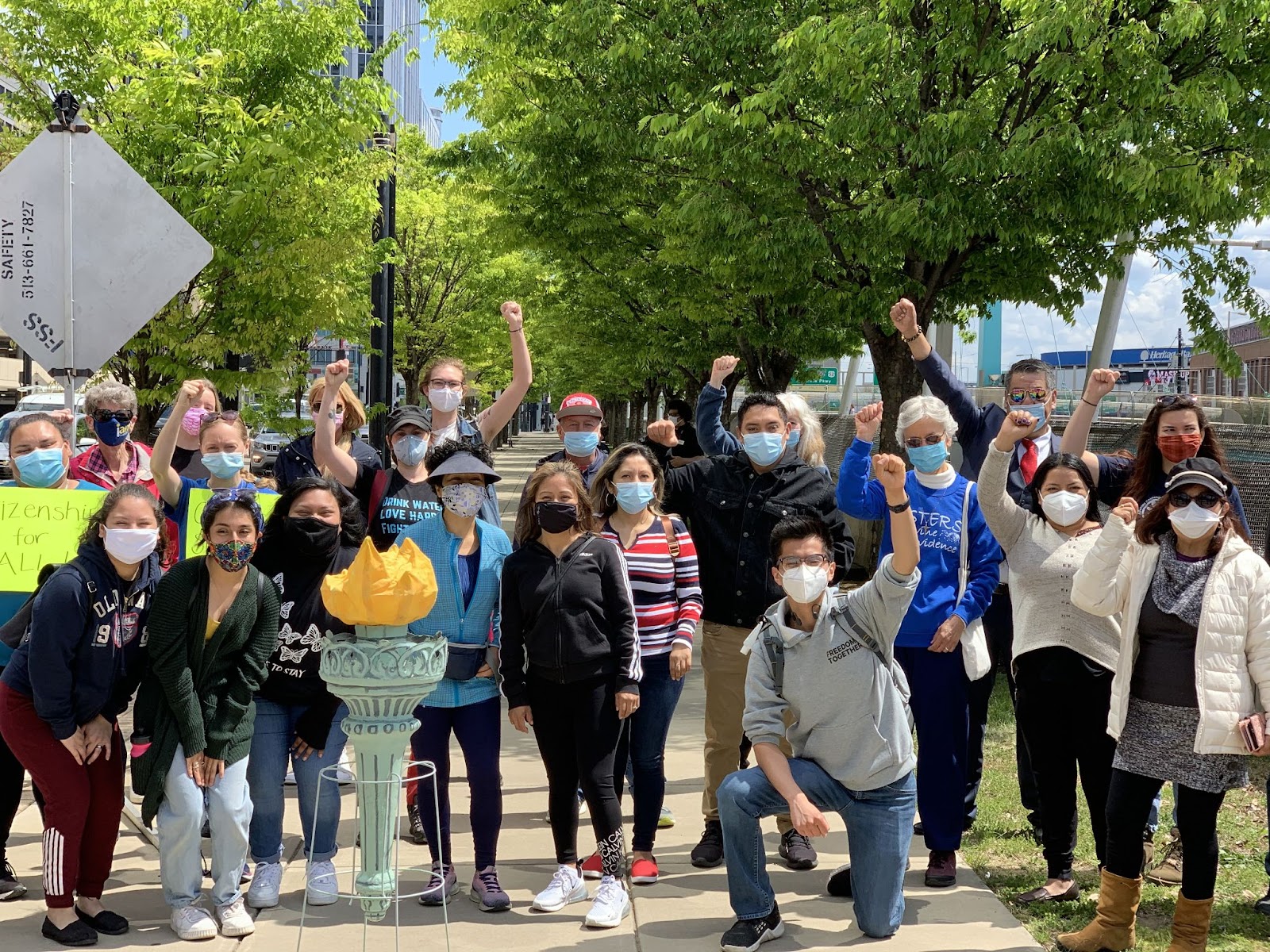 CINCINNATI, OH –  The March to Victory: Relay Across America, a nationwide effort to demand a roadmap to citizenship for 11 million undocumented immigrants living in the U.S., reached Cincinnati on Monday, April 19 with a rally outside Senator Rob Portman’s office. Aiming to galvanize support for immigrant inclusive-measures, including COVID relief aid for all, and measures that protect essential workers fighting on the frontlines of the pandemic, the Cincinnati Interfaith Workers’ Center and the Intercommunity Justice and Peace Center is leading in that effort locally and engaging nationally with Firm Action and the We Are Home Campaign.

“We’re all flesh and blood. We want to be walking around free like you are, without fear of being taken by Immigration. We want to have the liberty that you have because we’re all human beings together,” said Horacio, a leader from the immigrant community.

The rally was part of Relay Across America, a national community-led campaign made up of in-person and virtual events that began in Washington state and will end in Washington DC on May Day, also known as International Workers’ Day. Each event has featured the symbol of a torch, referencing the Statue of Liberty and her guiding light to freedom.

“‘According to the U.S. Department of the Interior, the torch represents the idea that light, or enlightenment, is needed to achieve freedom. You have to see freedom, or know it exists, to achieve it.’ That’s why we’re here today to enlighten the public and Senator Rob Portman about citizenship,” said Samantha Searls from the Intercommunity Justice and Peace Center. (IJPC).

Nearly 30 states have held events, and passed the torch from city to city, to call for a humane immigration system that protects undocumented immigrants, including essential workers, DACA and TPS holders, and those who don’t currently have a pathway to citizenship.

Danny Caracheo, a DACA recipient and Immigrant Rights Organizer for Michigan United, drove the torch to Cincinnati yesterday from Grand Rapids, MI. “We’re not going to stop until we get to Washington DC!” Dany continued, “The immigrant community has been one of the most essential communities during the pandemic. Yet despite that, they’ve been excluded from numerous resources that they desperately need. That we desperately need.”

Tomorrow, representatives from Cincinnati will drive the torch to its next destination, Nashville, TN.

Earlier in the day, a handful of leaders from the immigrant community shared their stories with a representative from Senator Rob Portman’s office.

Sandra Ramirez, IJPC’s Immigration Program Organizer, shared a story about losing her brother to deportation as a teenager. “As a 17 year old I had to translate between my parents and lawyers. As a 17 year old I had to go to school and pretend everything was okay. Instead of worrying about funny things like prom I had to prepare myself to say good-bye. To this day thinking about it I do have trauma from it but it’s something I haven’t really healed from. I can’t [heal] because it’s still something that is happening to many families. Something that is reminded constantly through the news or friends or community members.”

To watch the full livestream from the rally, visit IJPC’s Facebook page.