Through a framework of nonviolence, IJPC works to end the death penalty in Ohio, educate about human trafficking, promote immigrant justice, and foster peace.

A record-low percentage of Americans believe the death penalty is morally acceptable. Not only is the death penalty morally wrong, but its application is rife with inequity. A 2011 non-partisan Task Force found evidence that Ohio failed to meet 93% of the standards for basic fairness in capital cases. With your voice, we can put an end to executions in Ohio and advocate for national abolition. Join us.

In the United States, there have been reported cases of trafficking in the massage industry, animal husbandry and farming industry and even in the healthcare industry. It exists in both regulated and unregulated systems. It exists in mainstream and underground networks. There have been cases from all 50 states, and Ohio is currently ranked 5th in the nation for the number of cases reported to the National Human Trafficking Hotline.

By learning more and getting involved, you can help put an end to human trafficking. Join us.

Immigrants seeking to build a new life in the United States must navigate through a system designed to turn away those most in need. Discriminatory laws, strict requirements, expensive fees, backlogged courts and limited access to visas and green cards are just some of the problems immigrants face. By listening to the stories of those most affected, we can learn and advocate for change. When you stand with immigrants, you strengthen our community. Join us. 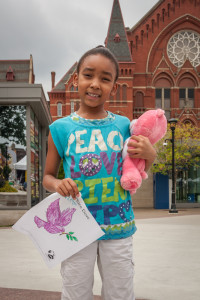 Creating a more nonviolent society requires us to actively root out injustice everywhere and also work to replace violence with active peace. With local gun violence on the rise, the proliferation of hate that fuels racism, and outrageous military spending, there is much work to be done locally and around the world. Join us.