Grounded in relationships with people on death row, IJPC works to abolish the death penalty in Ohio and beyond by educating the Greater Cincinnati community and encouraging our network to advocate for reform or repeal. The only organization in Greater Cincinnati specifically committed to abolishing the death penalty, IJPC specifically challenges Hamilton County’s aggressive pursuit of capital punishment. 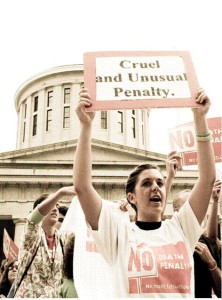 IJPC holds the position that implementing the death penalty, even for the most serious of crimes, is morally wrong and a violation of basic human rights. In addition, we believe the system as it stands is so broken that it would be nearly impossible to fix. To date, eleven men in Ohio have been found innocent of the crimes for which they were convicted, after spending decades on death row, and have been exonerated. Research shows that receiving the death penalty in the state of Ohio is highly dependent upon geographic region and more likely when the accused is a person of color and the victim is not. It also shows that it is not an effective deterrent to murder, that it is emotionally damaging to the prison staff who must carry out the law, and that it inflicts further trauma on the families of the murder victims. It is estimated that Ohio spends nearly 17 million dollars a year on capital cases at minimum, depleting needed revenue to address root causes of violence and victims’ needs.

Plug in and show up: